British Flora aims to provide high quality, British native plants from seed and vegetative material.
We produce commercial quantities of British native plants for use in a diverse range of areas such as reed beds, wildlife / habitat creation and remediation as well as native species green roof areas. We aim to adopt a universal standard terms and definitions that are easily understood by those involved in the use of native flora.

At British Flora, we only grow British Native plants that are from fully known British provenance, either from our own seed bank or trusted sources. We also collect seed and vegetative material from various organisations such as the Environment Agency and local authorities, with permission.

British Flora also aims to adhere to biodiversity conservation standards and is signed up to Be Plant Wise campaign to help raise awareness and prevent the spread of invasive species into the wild.

British Flora aims to offer a complete range of flora, Native to the British Isle, with full British provenance that is grown exclusively at our nursery. British Flora does not import any plants from overseas as we aim to produce UK Native wildflowers, grasses and sedges, marginal & aquatics in commercial quantities.

We are able to offer our own site-specific UK native wildflower seed mixtures and offer suggestions of plant species specifically suited to your site’s requirements.

To ensure the conservation of native species British Flora will adhere to this code and ensure that their activities do not threaten or unlawfully disturb wild flora and fauna and their habitats.

The purpose of British Floras’ Code of Practice is to:

When supplying plants / seed, British Flora will adhere to the specification for the plants/seed that has been provided by the customer unless:

British Flora, as the supplier, will keep a written record of any verbal agreement.

Plants, or flora, for the purposes of this Code, are defined as any plant matter capable of being grown or propagated – including entire plants, seeds, rhizomes, bulbs, corms, roots, cuttings, clonal (including in vitro) material.

to be representative and inherited from plants still growing in the wild, and in native plant communities, in Britain.
Many species native to Britain are also native to other parts of the world. However, a British native plant, for the purpose of this Code, is one which can be traced back to its wild origin within Britain.

Some species do not occur in all three British countries or Ireland and may not be native to large areas of Britain by virtue of their natural distribution. For example, they may be absent from offshore islands, confined to particular latitudes or altitudes (e.g. alpine species are not found growing away from high mountain areas).

There are many different definitions for the term “origin” within the horticultural trade, for the purposes of describing native plants, the term “Native Origin” is used.

A plant of native origin is one whose genetic makeup has been inherited from and which is representative of plants which still grow in the wild.

Native provenance is defined as the place where a stand of native plants grows “in the wild” but where there is a possibility that the plants were planted or introduced and originated from somewhere else. However, the plants appear to be native and well adapted to the site and locality. 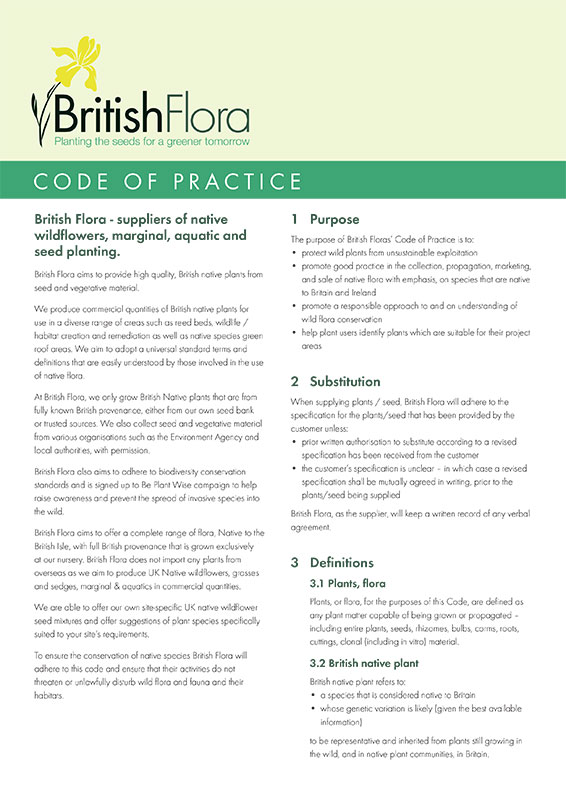 This website uses cookies to improve your experience while you navigate through the website. Out of these, the cookies that are categorized as necessary are stored on your browser as they are essential for the working of basic functionalities of the website. We also use third-party cookies that help us analyze and understand how you use this website. These cookies will be stored in your browser only with your consent. You also have the option to opt-out of these cookies. But opting out of some of these cookies may affect your browsing experience.
Necessary Always Enabled
Necessary cookies are absolutely essential for the website to function properly. This category only includes cookies that ensures basic functionalities and security features of the website. These cookies do not store any personal information.
Non-necessary
Any cookies that may not be particularly necessary for the website to function and is used specifically to collect user personal data via analytics, ads, other embedded contents are termed as non-necessary cookies. It is mandatory to procure user consent prior to running these cookies on your website.
SAVE & ACCEPT
View Cart Checkout Continue Shopping